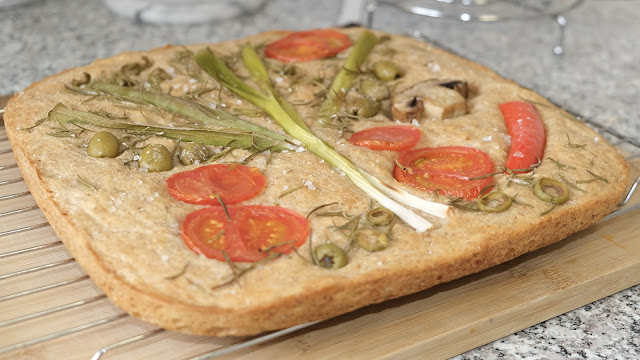 Let food tell a story.  Making this bread with the family is a great way to explore the Holy Bible and provides the participants with visual cues that will help them remember the story. You will be able to literally digest the story from Judges!
I will not show you how to make the bread, but will show you how to turn the bread into a picture that will help everyone remember.  Follow the link for instructions on how to make the bread.

How to make Focaccia bread.

Outline of the story

This story comes from the Book of Judges in the Bible. There were twelve judges, Deborah being the fourth and only female judge.  She was well-known for sitting under a palm tree where she would settle disputes among the people of Israel; hence, the name Deborah's Palm Tree.  The palm tree is represented by the spring onion (scallion) shaped to look like a tree with rosemary as the leaves.

How Israel Is Given Judges By God

Joshua realises he is dying and calls the people together.  After recounting their history, he sets up a stone at Shechem to represent the covenant between God and the people.  The stone is represented by the mushroom.  Notably, there were about 150 years between Joshua passing away and Deborah's reign as Judge.

One day, Deborah calls for the famous soldier Barak to discuss some matters concerning the army of Jabin.  God commanded Barak to go to Mount Tabot to battle against Sisera.  Barak agrees, but insists Deborah goes with him. However, it is foretold that Sisera will escape and be killed by a woman.  I used slices of tomato to represent Deborah and Barak discussing matters under the palm tree.

Sisera is killed by Yael

The battle goes well for Barak and his forces, but Sisera inevitably escapes. He hides in Yael's tent telling her to not give him away to anyone, but while he is sleeping she drives a tent peg into his head killing him.  I have used a chilli pepper sliced in half longways to represent the tent peg.

I hope you have fun making this bread and telling the story with your friends and family.