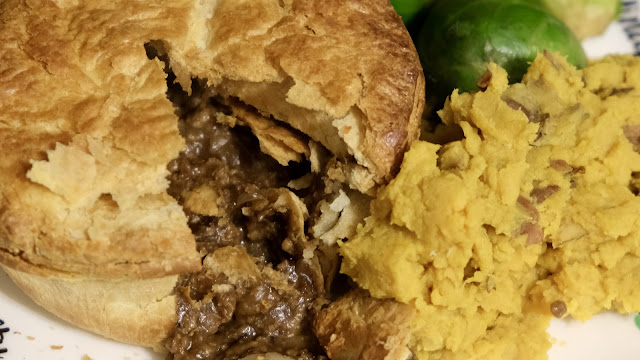 Vegan pies are great!  I find the pastry to be fantastic and the filling to be satisfying.  Above is a Plant Chef no meat vegan pie, which i had with mash and cabbage.  The pie filling is seasoned Seitan in gravy that was great although it did seem a little light on the filling.  On the whole this pie was differently a winner with me and not the only one.  Yes, plant Chef have another vegan pie.

The Plant Chef Savoury pie has mushrooms in, but i felt it was a little thin on the filling.  It was, however, still very tasty and had a great pastry case.

Vegan chicken and mushroom pie.  In short, this had a great filling, but there wasn't much of it.  However, it was a nice pie and the pastry was OK.

Vegan mince and onion pie.  This had more filling and had a great taste.  Out of all of the pies i tried, this was one of the best.  I do like a good pie and this is one that i will be trying again. In addition, I liked the pastry and it really did have that meat pie feel about it in every mouthful.

The name springs rise to anticipation of a fantastic feast in a pie.  Although the pastry is vegan it does not differ from their non vegan pies in tastes and texture.  The filling is fine with a rich tasty gravy and mock meat bits.