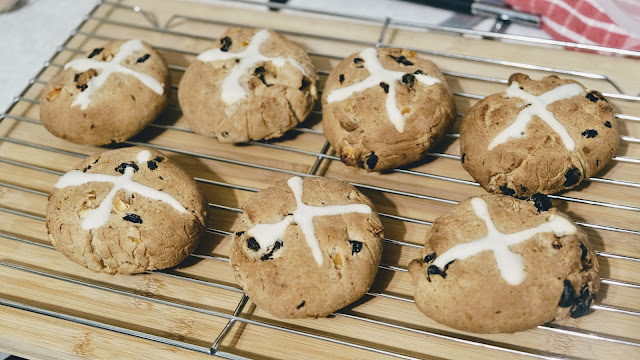 Hot cross buns are a sweet treat at Easter for Christians in the UK. They are a bun with crosses on, have sultanas or sometimes over fruits such as apple in with spices and mixed peel.  People have them as a snack with butter and jam or just butter at anytime over Holy week and Easter.  Some people like to toast them while overs eat them as they are.

Since i am a vegan, i wanted to make a vegan version of this traditional British Easter bun.  I chose to go with the traditional fruits and mixed peal because i know this is what people are expecting and i didn't want to disappoint them.  The mixed spice adds a unique flavour; however, i  added more cinnamon so as not to stray to far from the traditional bun.  In addition, i added both lemon and orange zest simply because i had both in the fridge and they needed using up.  The zest adds a fresh zing to the flavour. Moreover, i choose to use plain white flour to keep the bun lighter in texture since wholemeal and bread flour can make the texture heavier and carser.

The buns turn out OK eventhough the dough still seems to be too heavy.  The flaviour was great and the texture inside the bun was fine, but they would have been better if they were safter.  Making a bun light and soft without using egg is more difficupt than i thought.

On reffection, i added another 25g to the 250g of flour to make 275g of flour for the recipe and next time i will test the dough before leaping in to knead it.  In addtition, putting the flour in a cleanable container instead of leaving it in the bag would make cleaning up after such an inccident much easier.  Furthermore, adding the milk and butter miture incromentally rather than pooring the lot in in one go would give me a chance to see how the dough was going and i would have a chance to add more floor at this ponit making it an easier problem to solve.

Hot cross buns are a very British thing in remembrance of Easter with a distictive cross that represents the cross that Jesus died on.  Christians don't celebrate the death of Jesus so this is a very sombre occasion. However, we do try to make it fun for the kids by giving Easter eggs and baking buns.  This is a different recipe that uses an egg alternative made from milled flax seed and warm water making the recipe vegan.  In this recipe i have chosen to stick with tradition and use plan white flour to make a lighter dough.  The point of this recipe is to create a tasty vegan alternative to a classic British bun for Easter.

Dough to sticky or wet

I made the dough to wet, so a added more flour incremental until i had rectified the problem.  The dough should not stick to your fingers.  As you knead the dough, anything dough stuck to your fingers should come off.   If it doesn't come off within the first minute, then your dough is to wet and needs more flour.

Simple add more water.  Do this in small amounts until the dough is holding together.

It is a good idea to keep an eye on the buns while they are in the oven.  Everyones oven is different so the temperature may need adjusting for time to time

The buns turned out ok in that they are vegan and did taste good.  However, they were not as light and as soft as i was hoping for.