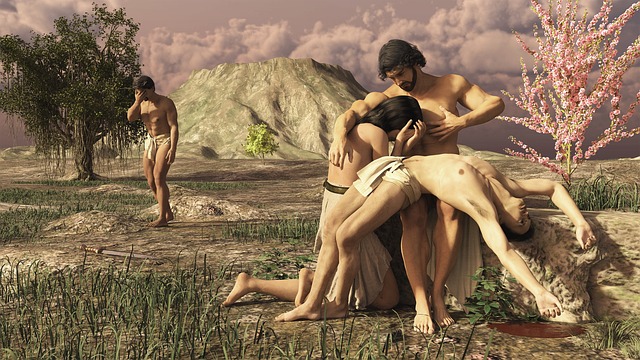 Adam and Eve had three sons after being told to leave the garden of Eden: Cain, Abel and Seth. However, Seth is born latter in the story, yet still plays a significant roll.  This story may be brief, but it is so important to understanding the bigger picture.

Cain is the eldest of the three brothers followed by Abel and it is with these two brothers that the story starts.  While Abel is a keeper of sheep, his older brother Cain is growing vegetables.  As they get older, both give offerings to the Lord; Cain offers fruit from the ground and Abel the first fat portions from the first of his flock.  The story doesn't tell us why Cain's offering was refused or why Abel's was accepted, but it does say Cain was very angry at being rejected:

Before I go any further, for those of you that don't know, countenance means person's facial expression, so we are being told that Cain's face showed unhappiness.  We also know that Cain was angry because God asks him why he is angry:

'The Lord said to Cain, “Why are you angry, and why has your countenance fallen? If you do well, will you not be accepted? And if you do not do well, sin is lurking at the door; its desire is for you, but you must master it.”' (Gen4: 6-7)

God is clearly giving Cain a warning to be on his guard against his own feelings of anger and jealousy.
Cain, ignoring God's warning, then gives in to his feelings of jealousy and murders his own brother Abel.  God finds out about this and to make matters worst Cain then tries to device the Lord by saying he didn't know where his brother is.

If we trace back Canis's steps, we see that first Cain give a half hearted offering to God, becomes jealous of his brother and then gives into anger against God's warning not to, murders his own brother and then tries to deny he knew anything about it.  If Cain had listened to God, he would have tried again with a more genuine offering.
God explains the consequences of Cain's sin but shows mercy to him by giving Cain a mark indication he must not be killed.

[...When you till the ground, it will no longer yield to you its strength; you will be a fugitive and a wanderer on the earth.” 13 Cain said to the Lord, “My punishment is greater than I can bear! 14 Today you have driven me away from the soil, and I shall be hidden from your face; I shall be a fugitive and a wanderer on the earth, and anyone who meets me may kill me.”  Then the Lord said to him, “Not so! Whoever kills Cain will suffer a sevenfold vengeance.” And the Lord put a mark on Cain, so that no one who came upon him would kill him...] (Gen 4: 12-15)

Even though Cain has done this terrible thing, God shows mercy and compassion.  It also reiterates there are consequences to revenge.  Cain murders his brother out of jealousy and a sense of revenge, so if people are allowed to murder Cain out of revenge, where is the justice in that?
The moral here is not to give into jealousy at someone else doing well; if you see God shining favour on someone and not you, you should try again not plot revenge and murder.
The bible says that Cain left the presents of the Lord and settled in the land of Nod.  This gives us some idea of the very real encounter that people still had with God at this time and of the leaving God's position is what Cain's ancestors show in their behaviour next.  When we are angry, does God speak to us in our heart? Do we then walk away to start a new live without Him?
We then see that Cain has a wife and a son and the scripture follows his family line from his son Enoch, whom he names a city after, to Tubal-cain who made all kinds of tools from bronze and iron.  However, it then jumps back to Lamech who is the father of Tubal-cain and Naamah from his one of his wives Zillah and is also the father of Jabal and Jubal from his other wife Adah.  Lamech boasts to his wivies about killing two men in Gen 4: 23-24,

“Adah and Zillah, hear my voice;
you wives of Lamech, listen to what I say:
I have killed a man for wounding me,
a young man for striking me.  If Cain is avenged sevenfold,
truly Lamech seventy-sevenfold.”...]

Meanwhile, Adam and Eve have a third child and name him Seth.

"Adam knew his wife again, and she bore a son and named him Seth, for she said, “God has appointed for me another child instead of Abel, because Cain killed him.”  To Seth also a son was born, and he named him Enosh. At that time people began to invoke the name of the Lord." (Gen 4: 25-26)

In the next we see how Seth's line leads to Noah and how Cain's line leads to depravity and destruction. At this point i feel it is a good time to ask ourselves a question, which line are me more like? Are we like Cain's line bragging about our wrong doing and showing no signs of repentance? Are we getting on with our lives making tools and playing music but missing the importance of turning to God and keeping the faith with a humble heart? Or are we trusting in God and being grateful for what we have rather than dewing on what we have lost?  God undoes the wrong that would have lead to complete destruction of humanity by granting Adam and Eve another son who will eventually be the ancestress of Noah who's family will revive the flood.

In this story we see that God has a plan and that plan will be carried out no matter what happens.  Not even murder can stop God's plan.  Furthermore, it is always worth give our genuine best to God.

I hope that you liked this blog and that you share it with your friends.  If you want more about Christianity and food, please subscribe.