The United Kingdom: A Nation At Hell's Gate 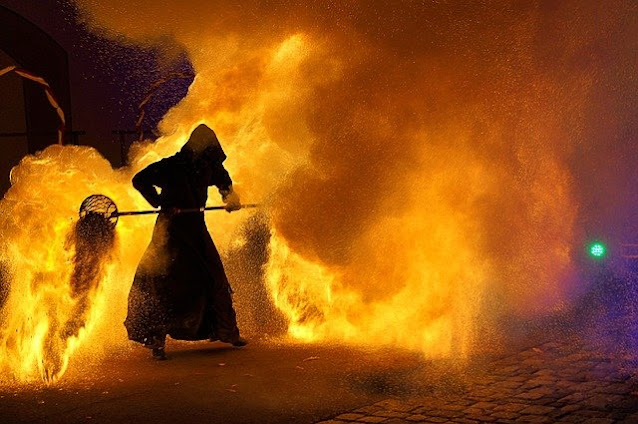 I share the good news with others, but people are not always happy to hear it. I am cut off from my remaining family and i fill that time is running out. My degree is useless it seems and i have no job. I trust in God, but i can't see an end to these troubles. I feel as if the immense worry i have been experiencing has just been put in a box and is rattling around inside it, but i don't feel cured of that worry. For that to happen, i would need to be closer to my remaining family and that means living within walking distance, working in a job that was pleasing to God either from home or in that same area and seeing them on a regular basis. In addition, I am worried about my family and their state of faith. It seems that almost everyone in London and indeed in the whole of England have lost their faith.  This has left the UK wide open to demonic attack in the shape of false religions and false prophets.

A lack of faith has left the UK open to false religions.  God is not taught in the schools and the name of Jesus is forbidden.  The UK might not be communist, but it is just as Godless. Sunday is no longer a national day of rest and worshipping God is no longer valued.  Even many of our MPs live in sin. What does it matter if the country i live in is capitalist or communist if it has forsaken God?  My point is the UK has become as Godless as a communist state so what does it matter if it is capitalist?  The void that has opened up due to a lack of faith allows room for false religions to grow as a despondent people look to fill their lives with some spiritual meaning.  However, without the teaching of the Holy Catholic Church, the public quickly find themselves on the road to destruction, unawares to the final destination.  Years ago, the school day would start with prayers and registration and then more prayers and sometimes worship.  Lessons in morality, considering others and thinking ahead before making a decision were all a part of the school day.  Somehow, the UK has lost its moral guide and it shows everywhere.

In addition, when i am evangelizing in the community, the thing i encounter the most is the religion of Nazism dressed as socialism. People are consulting the dead using Ouija boards and putting their faith in TV, politics, tarot cards and food. God help us all.  The media also glamorises the occult in movies and TV shows.

Without a moral compass, Britain is coasting for the rocks.  Even in the Salvation Army charity shops, you can find tarot cards for sale and its staff attending Séances, which is something else that was popular with the Nazis.

It's Time To Pray!

Not enough people are praying and fasting.  Jesus places such importance on prayer that He gave us the Lord's prayer saying:

“This, then, is how you should pray:

‘Our Father in heaven,
hallowed be your name,
your kingdom come,
your will be done,
on earth as it is in heaven.
Give us today our daily bread.
And forgive us our debts,
as we also have forgiven our debtors.
And lead us not into temptation,
but deliver us from the evil one.’" (Matt 6:9-13)

Jesus also said this about fasting:

[...Then John’s disciples came and asked him, “How is it that we and the Pharisees fast often, but your disciples do not fast?”

Jesus answered, “How can the guests of the bridegroom mourn while he is with them? The time will come when the bridegroom will be taken from them; then they will fast...] (Matt 9:14-15)

Obviously, praying and fasting is important.  When I was at school, everyone would pray before we started learning.  We would also have religious teaching on a daily basis.

Things I would like you to join me in prayer with:

Steady income from a job that is pleasing to God

It is easy to earn money if you are immoral, but what about our treasures in Heaven? Many people including some Christians don't even believe in an afterlife; thus, see no point in building riches in Heaven.  However, this is what we should do. Look at what Jesus said:

It seems, that money and the acquisition of money rather than preparing for the afterlife is on most people's minds.  Subsequently, the denial of Heaven gives rise to greed, which is then used to justify any immoral act in order to acquire comfort in this world.  People say why give up a copper coin for a gold one i have never seen before?  This cliché highlights the position that money has taken in some people's mind.  As a result, money is all important and compassion is, nothing more than, a liability.  It is necessary to have a job that is pleasing to God and not one that conflicts with His will.

An end to abortions

Killing is wrong.  We all know that killing is wrong.  We are commanded in the ten commandments not to kill.  Without the Church's teaching on the word of God, people have started to become so confused that some think it is OK to kill a baby if it is an inconvenience to them and that they shouldn't feel any shame about it.

Again, another of the ten commandments that people willingly break and use governments to do it: working on the sabbath.  We have always been warned about communism, yet here it is!  No religion, no day of rest.  The UK is at risk from every danger and lots of people that have been programmed to hate the UK, Christians and Jews.  With no moral guide, the employers see no reason why they can't make their staff work on a Sunday.  With no one teaching about the dangers of greed, the self-employed either give into the temptation of greed or they are forced to work on a Sunday by people in the banks.  The banks have no moral restraints only legal ones that they seem to circumvent when needed.  As a result, families suffer because there is day to get together that is a regular day.  Sunday was a time people spent together as a family and enjoyed each other's company, but thanks to the Godless people we can't even have that.  We are expected to work all the time and have no time with family.  We are expected to put work at the centre of our lives instead of God.  When we have God at the centre of our lives, the family benefits because we end up with time together.  Centring God in our lives means re-establishing Sunday as a day for worship.

An end to poverty

Ending poverty is the last thing on the government's agenda.  Government seems more interested in blaming white people for something.  The world is full of white people trying to make out they are not a racist it is all them other white folk.  We are told that we should kneel before black people like they were some god or our master.  Meanwhile, people plunge deeper into poverty with little hope of getting out of it.  The police seem to think that crime is now OK if it is earning money and they can take advantage of it. People more than ever are on the streets with no moral system to protect them from unscrupulous minds ready to take advantage of them.  The government and the police show no signs of shame.

The Pending War Ahead

Many of us around the world feel in imminent danger. We feel that our families are in danger. Subsequently, many of us feel that we must defend ourselves and our families from the perverts and weirdos that have a glazed look in their eyes. Most people i speak to believe that there will not be a peaceful outcome because it is impossible to reason with people trying to dissolve the Christian Church.  They seem brainwashed and robotic.  How can any of us have a dialogue with people that criminalise any response we give that they don't like. The anti-God and anti-traditional family types don't want a dialogue they want a monologue because they are trying to pass off Satanism as Christianity thinking that we are stupid. In other words, the agents of The Satan are trying to redefine the family into something sinful and grotesque without experiencing any resistance!

It is easy to trust in God and to feel alright with the world when you have food and a safe place to live. Most know He will save our souls because that is what He promised and we believe He is the Mashiach. It's not Jesus we don't trust. It's the teachers in the schools poisoning the children's minds with their anti-God rhetoric, the people demonising us and spreading lies about Christians in the unions and the people in power taking away our right to complain and stand up against the perverts are the ones we don't trust. I tell you, this kind of thing happens all over the world. Every history student has seen this type of thing before and know that a desperate people will cling on to any fanatical leader that will promise liberation from this oppression. We all know it will end in world war where, at the end of it, we will either have a save place for heterosexual God loving families or there will be Hell on Earth. A Hell with the perverts in control and with heterosexual families and Christianity outlawed. It is not about trust, it is about feeling at ease. How can anyone feel at ease when there is a snake slithering around the children in the schools, a lion attacking the family and a dragon attacking the Church?

Secular Society Is A Failure

Secular society has failed and it will be difficult to rectify the problem without trouble.  The groups that have arrived with the intention of taking over will never give up that fight and will not go peacefully.  The groups of perverts already in the country that have gained power will never see reason and have already shown a willingness to misuse power.  A lack of moral teaching has led to immoral thinking and the age of heathenism.  We will never have peace in a world where the perverts have power to abuse others. People just won't stand for it.