The 2 tress in the garden of Eden 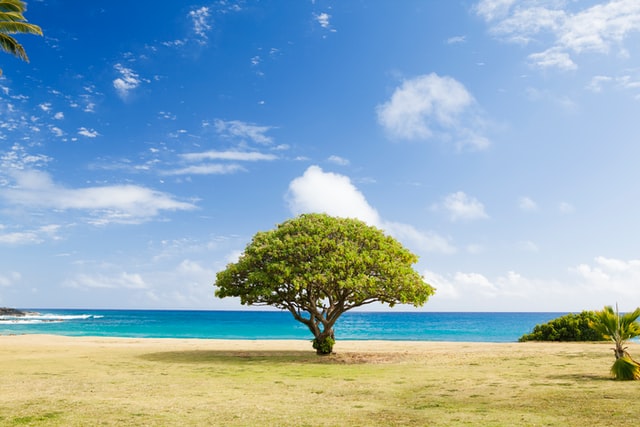 There are two trees in the story of Adam and Eve in the book of Genesis, but what is the difference?  Why does God not want Adam or Eve to eat from either of these trees?

The tree of knowledge of both good and evil

And the Lord God commanded the man, “You are free to eat from any tree in the garden; but you must not eat from the tree of the knowledge of good and evil, for when you eat from it you will certainly die."

God then creates woman from a rib of Adam.  Then the following happens at the beginning of chapter 3,

Now the serpent was more crafty than any of the wild animals the Lord God had made. He said to the woman, “Did God really say, ‘You must not eat from any tree in the garden’?”

Eve responds by saying God told them not to or they will certainly die in verses 2 and 3 of this chapter:

From the above verse we see the location of the tree of good and evil: the middle of the garden. They are aloud to eat from any other tree at this point, but still have the choice to eat from this forbidden tree.  In other words, the tree is not guarded by anything.  This is notable because we see Eve gives into temptation after the serpent questions God's trustworthiness in the next line. Verses 4 - 6:

'“You will not certainly die,” the serpent said to the woman.  “For God knows that when you eat from it your eyes will be opened, and you will be like God, knowing good and evil.”  When the woman saw that the fruit of the tree was good for food and pleasing to the eye, and also desirable for gaining wisdom, she took some and ate it. She also gave some to her husband, who was with her, and he ate it. '

They both chose to give into temptation when they should have resisted it.

In verse 7 we see the beginning of the consequences to their disobedience.

"Then the eyes of both of them were opened, and they realized they were naked; so they sewed fig leaves together and made coverings for themselves."

Verse 17 tells the effect Adams disobedience has on the world,

To Adam he said, “Because you listened to your wife and ate fruit from the tree about which I commanded you, ‘You must not eat from it,’

“Cursed is the ground because of you;
through painful toil you will eat food from it
all the days of your life.

How the disobedience or just lack of trust in God directly causes the ground to be cursed, i don't know.  What I do know is Adam must now work hard to get the ground to yield a crop and the ground will bring forth weeds and thistles where it didn't before.

The tree of life

The location of this tree in the garden is unknown; however, we are told what happens to those who eat its fruit in verse 22 of chapter 3,

'And the Lord God said, “The man has now become like one of us, knowing good and evil. He must not be allowed to reach out his hand and take also from the tree of life and eat, and live forever.”'

So the tree of life is the key to immortality.  Notice the the verse says, "...The man has become like us..."  This begs the question who is us?  I don't know the answer to this question, but I have heard it could mean the Holy Trinity or Angels.  Getting back to the effect of the tree's fruit when eaten: immortality.  God doesn't what either of them to become immortal now that they know good and evil.  God becomes so concerned Adam and Eve will eat from the tree of life; He places an Angel with a flaming sward to guard it and Adam and Eve are sent out of the garden as seen in verses 23 and 24 of chapter 3.

"So the Lord God banished him from the Garden of Eden to work the ground from which he had been taken.  After he drove the man out, he placed on the east side of the Garden of Eden cherubim and a flaming sword flashing back and forth to guard the way to the tree of life."

As seen in the two verses, it appears there is only one way in and out of Eden on the east side.  For me, at least, this is symbolic of not being able to go back or undo a wrong that is done.  It reminds us to think about our actions and shows us that sometimes consequences can be unseen.  Once someone has done something that they know they are not supposed to do, it can't be undone.  In other words, once innocence is lost, there is no going back.